Dolan Chasing Leaders Out Of Lorient As Stage 2 Starts 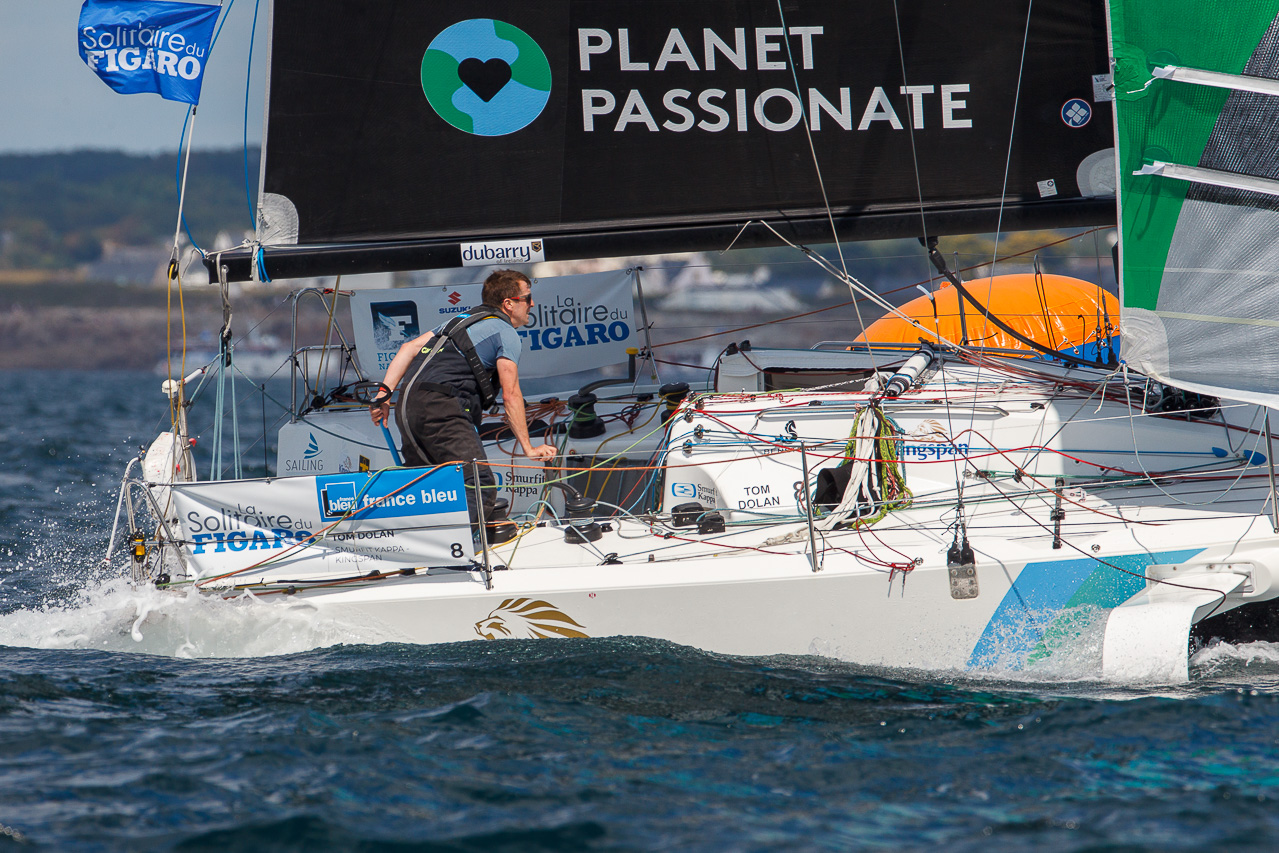 Posted at 11:11h in Uncategorized by Chiara
0 Likes
Share

After a promising tenth place on the 627 nautical miles first stage of La Solitaire du Figaro, Ireland’s Tom Dolan was fighting something of a rearguard battle after a modest start to Stage 2 this afternoon off Lorient.

At the exit from a challenging four leg round the buoys sprint stage, leaving Lorient, Dolan on Smurfit Kappa-Kinsgpan was in 24th place over one mile behind the early leader, French ace Tom Laperche.
Dolan was staying cool and planning to stick to the strategies discussed with weather guru Marcel Van Triest who advises the Lorient Grand Large group that the Irish skipper has been training with since his days in the Mini650 class. A slow down was predicted for early evening some three or four hours after this afternoon’s 1400hrs start. As the 34 boat fleet approach Belle Ile on the early part of a 100 miles downwind passage to Rochebonne light, the NE’ly wind should go light and so present some opportunity for a catch up.
But in terms of the General Classification he was in good shape, starting the 490 miles stage round Brittany with a deficit of 2hrs 15 minutes 41 seconds on the leader of the race Xavier Macaire (Groupe SNEF) 47 minutes behind third placed Tom Laperche (Bretagne CMB Performance) and within a handful on minutes of the top five.

His tenth place on the first leg as a great morale boost for him, not least as an opening benchmark in the 34 boat fleet. But this second stage passes through all of Brittany’s notorious tidal traps including Raz du Sein at Ushant and the Raz Blanchard – or Alderney Race – as well as an often challenging finale into Fécamp – and so big time gaps can be opened or closed depending on timing at these key stages and the prevailing wind strength. 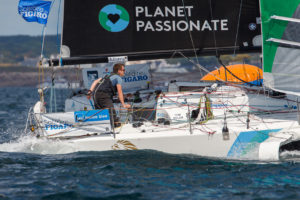 As he cast of his lines from Lorient this afternoon, in bright sunshine Dolan commented,
““The weather is looking that there might be no really big tidal gates unless we are behind the routing we have. We get stuck a bit at Penmarc’h tomorrow but you never know. Because the wind has been in the North East for so long it might mess up the tides a bit in the English Channel but let’s see. The focus straight away is getting off the start line better this time and not being left behind, and not crashing into anyone. This first part has a lot of manoeuvres and so they need to be clean and then you need to be quick tonight. I know this passage to Belle ile and to Rochebonne pretty well, I’ve been out there more times than I have had hot dinners!”
“This is a good old fashioned La Solitaire coastal course. There will be hardly any time to sleep, maybe a bit of a siesta before the chenal de Four but it not like the first leg when we could sleep a lot on the upwind in the open waters of the Bay of Biscay. But with this high pressure system centred over Ireland and Scotland the thing is it will upwind almost all the way. That should, I hope be good for me as I had pretty good speed upwind, I have a little magic setting for my jib that I have worked on. That was good in the strong winds, but let us see.” Dolan explained on Saturday as he did his final strategic planning.
“It has been a good stopover for me. I feel rested even if I struggle to sleep. This morning I found myself up at four in the morning doing weather, but I kind of figure that is OK. As long as I bank sleep when I am feeling tired then I do find it is better to try and stay in the rhythm of the race.” He explained.
“The English channel will be interesting. I have two very different routings and need to see how it plays out nearer the time.”
The stage is expected to finish into Fécamp on Wednesday morning, which would in theory mark the half way point of the four stages race.