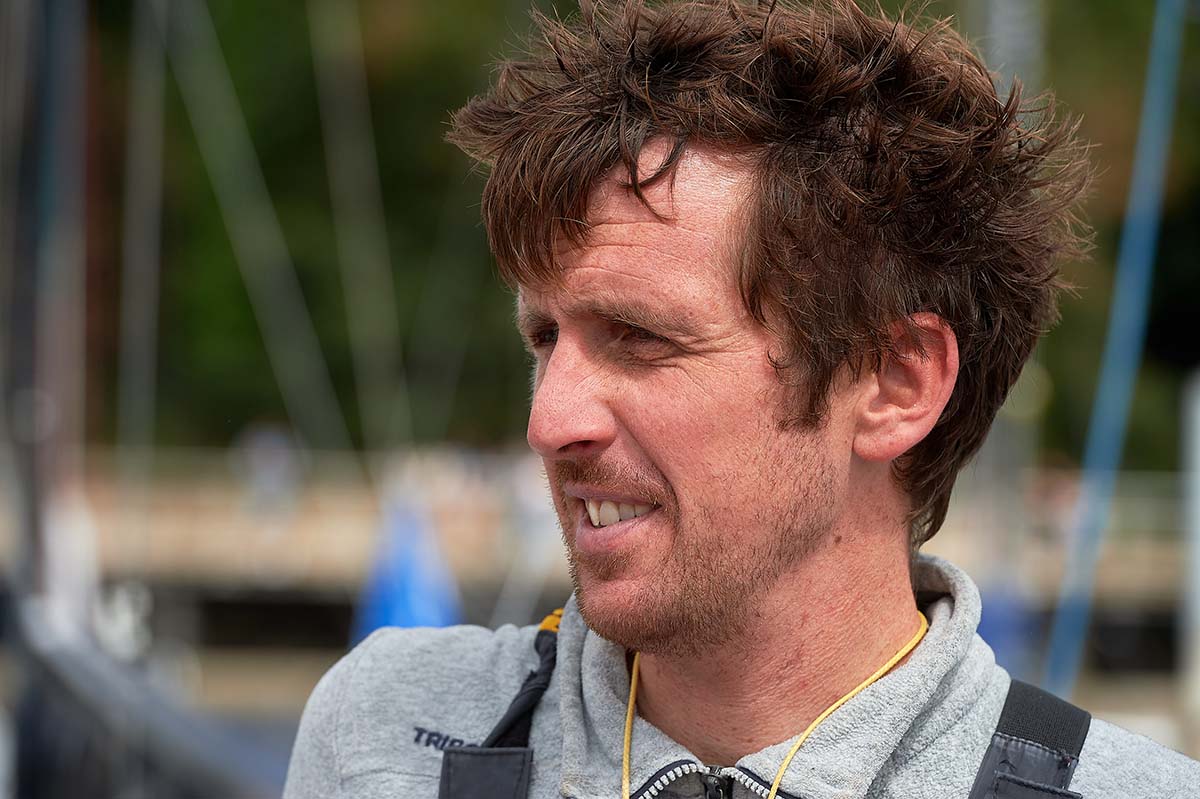 Posted at 15:03h in Uncategorized by Chiara
0 Likes
Share

Irish solo racer Tom Dolan remained in a positive, upbeat mood in the post race sunshine of Port La Foret, Brittany after finishing 14th on the first 559 miles stage of the 2022 La Solitaire du Figaro. Racing Smurfit Kappa-Kingspan, he sailed a very strong opening half of the race, lying second and pacing France’s pre-race favourite Tom Laperche to the most northerly turning mark of the race which started Sunday afternoon from Saint Nazaire.

But almost the entire 34 boat fleet regrouped in calm airs yesterday morning spread between the Scily Isles and Lands End. The Irishman’s fortunes fluctuated a few places here and there but he was always within the tightly packed peloton, staying true to his pre-race strategy of staying with the pack and trying not to make mistakes.

He, and the peloton around him, could do nothing to respond when some of the lower placed solo sailors gambled and went to the west in search of a new, strong northerly wind behind a frontal system. While they profited and took many of the top 10 places, Laperche squeezing into ninth, Dolan lost a few spots in the early morning coming into the finish line in the scenic Breton haven which is celebrating its 50th anniversary this year and is one of the centres of elite solo and shorthanded racing in France.

Speaking before heading for some much needed sleep Dolan said: I did say before the start that this would be a typical La Solitaire du Figaro leg where we all worked our backsides off and we would all restart in the same place and that is what happened yesterday. It was incredible. We were all catching up with the front, so there was this big cloud line going towards France and we were at the same speed as it and so all the boats lined up, it was mad. It was crazy. After three days of hard work we all end up in the same place except for these boats which went west. I am happy enough with the result. I controlled the controllables as they say and sailed well enough. I had a bad phase this morning when I lost some places but I had good speed I think. It was cool to be up the front with the other Tom (Laperche) and watch him to see how he does stuff, how much he sleeps. I need to take more care of myself for sure. On the long reach when we were neck and neck for hours I was too excited, trimming and trimming and trimming. He did the right thing and said ‘ there is not a lot going to happen here and went and rested, eat. He seems to go quickly when he is resting. I need to look after myself better, I ran out of water again!”