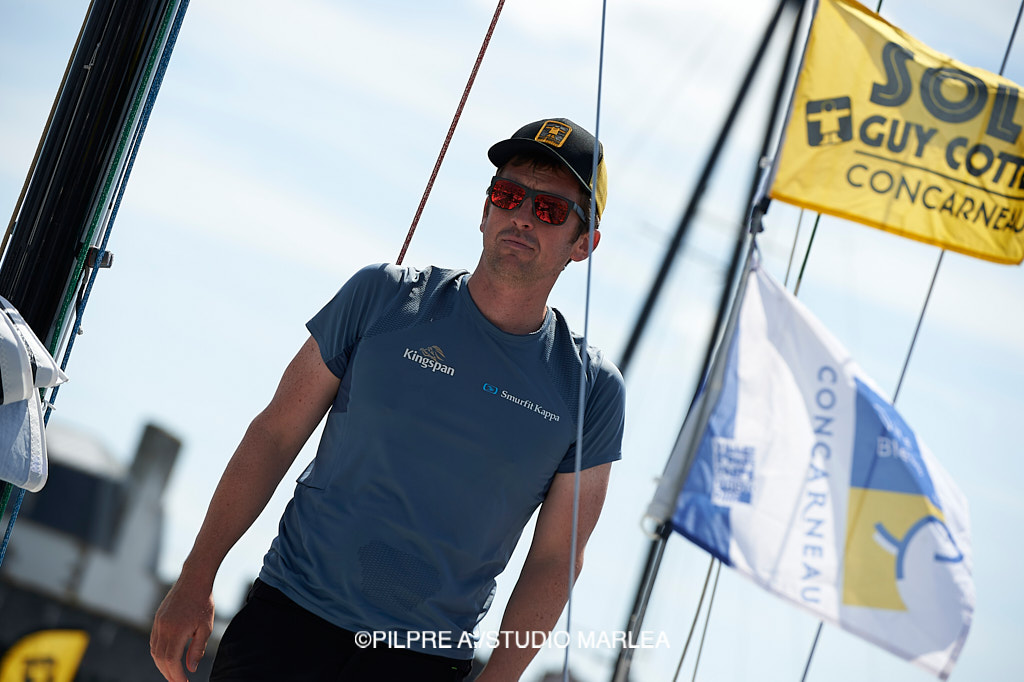 Posted at 16:03h in Uncategorized by Chiara
0 Likes
Share

Irish solo skipper Tom Dolan will spend this week dealing with some niggling technical problems and debriefing the factors which contributed to a disappointing 14th place in the Solo Guy Cotten solo race which finished in Saturday into his French home port of Concarneau.
A cavitation problem with his port rudder is the most perplexing technical issue that the Smurfit Kappa-Kingspan skipper is working on from today. This was an occasional hindrance on the 395 miles course which took the 34 strong fleet from the Breton port looping south to a mark off the Vendée coast and back to Concarneau. The route proved to be very much a speed test with few tactical or strategic options to climb back up the fleet.
Early in the race Dolan’s headsail split unexpectedly when he fell into it whilst on the bow retrieving a halyard. This caused an initial loss but he initially climbed back to the top group before losing out after the Birvideaux light when he stayed low of the fleet and dropped places.
“I feel pretty disappointed to have made the one mistake I always promise myself not to, that is splitting from the pack. But in terms of the actual result. I often find that I can bounce back from these disappointments and use them to affect a positive upturn at just the right time. It is always better to address these things now and sort them out than have technical worries during La Solitaire du Figaro.” Dolan said “ Right now I don’t feel happy with the way I sailed because I know I can do so much better and every race so far this season has been generally positive. And in some respects maybe this will be timely extra motivation for the final push before we line up for la Solitaire on 21st August.”