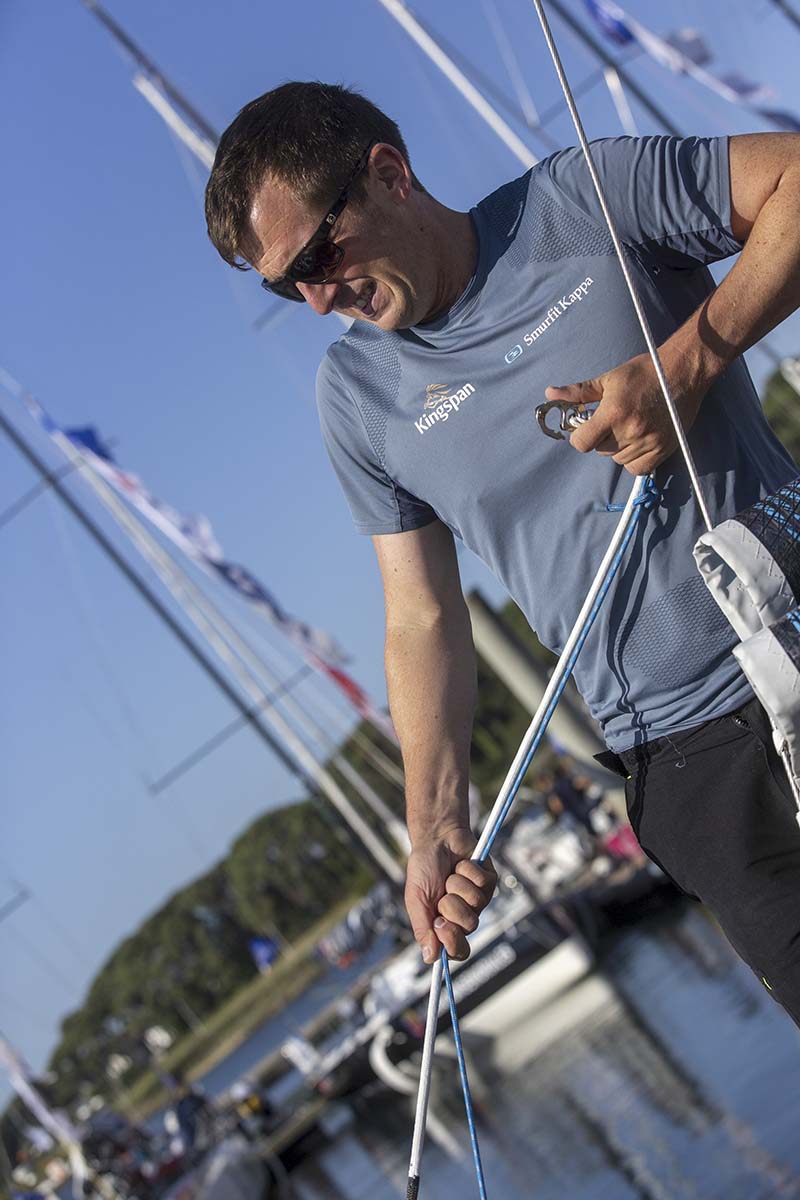 Posted at 18:13h in Uncategorized by Chiara
0 Likes
Share

Ireland’s solo racer Tom Dolan, who sails in the colours of Smurfit Kappa and Kingspan, will start his fifth La Solitaire du Figaro this Sunday. The 34-year-old who originates from County Meath but has lived in France for 12 years holds the record for the highest overall finishing place by a non-French skipper since 1997 after taking fifth in 2020. But while he remains intensely proud of that high water mark result he feels he has only now come to terms with the weight of expectation that it places on his shoulders, most of that coming from himself.

“I think last year in particular my expectations were too high. It put more pressure on me last year, much more. But now I feel like it is there, it is always in the bank, I have it on my CV. Last year I probably put too much pressure on myself to get out there and replicate it or better it.” explains Dolan on the deck of his Figaro Beneteau 3 Smurfit Kappa-Kingspan which proudly flies the Irish tricolour at the race dock in the heart of Nantes where the 34 strong fleet has enjoyed a week of build up activities.

This year’s race, the 53rd edition of the French solo multi stage offshore classic, aggregates nearly 2000 nautical miles of competition over three legs, all over 620 miles in length. It will be a long, tough race with usually four nights at sea. But Dolan has long since proven to himself and indeed to the French cognoscenti that he does best on the long, tricky stages. The longer, the better.

The first 644 nms stage starts Sunday from the mouth of the Loire and heads northwards to turn at Skokholm island off Wales’ Pembroke coast returning south to finish in the French ocean racing Mecca of Port La Foret. Stage 2, 635 miles, is a more typical English Channel type sojourn to Eddystone rock off Plymouth, to the Channel Islands and back down the Brittany and Vendée coasts to finish at Royan at the mouth of the Gironde, NW of Bordeaux. And the final leg is a marathon 700 miles across the Bay of Biscay and back from La Coruna to the final finish line off Saint Nazaire.

Fully primed and ready to get going he says of the first leg, “It looks like a proper leg of La Solitaire du Figaro, loads of transitions, lots of shut downs, a high pressure ridge to cross, a low and then another ridge a sting in the tail at the end. I like it tricky, I have never been that good on the big starts and helicopters buzzing around. My starting has improved for sure. We did a lot of starting practice in our group in Lorient and a lot of racing. I feel much more complete and that really helped. Overall I feel way more ready than ever before. The boat has been ready for a full week. I have been resting so much, eating and sleeping well and so to be honest I am almost bored, I just keep looking at the weather and doing the final prep.”

Now on his fifth edition he knows fully what to expect, the highs and lows, the dos and don’ts. He continues to work with a sports psychologist to help strengthen his mental game, especially maintaining confidence in himself and his decision making, especially when tired:

“I have made a list of things, rules I must not break. I will stick them up in the cockpit and do my best to adhere to them.” Dolan reveals. “The experience of having done it a few times before now should allow me to get in the rhythm of the leg sooner. I always end up tense and putting the foot to the floor. I definitely like the longer legs and it takes me a while to get going, I am a bit of a diesel engine ‘til I get warmed up but I know I have staying power. I always tend to better on the longer legs.”

But his goals are clear, “I am out to do better than that fifth and that will depend on not making these same mistakes as before. I need to take it easy and stay conservative, not taking any risks on the first leg, just stay with the group. I know what it is like to have a shocker on the first leg and feel out of it and I never want that again, spending the whole race feeling miserable and trying to make amends. And I feel well prepared. We have done a lot of racing, less training. It has been one race after another and probably raced more miles than ever before. Experience also says ‘stick to the plan, stick to the roadbook which means when to eat when to sleep and stay with it because if you get over tired it affects your decisions and choices, so I’ve learned that.”